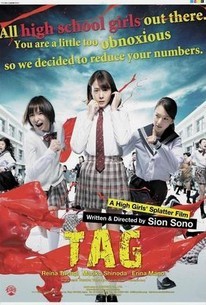 Mitsuko was on the bus with a bunch of other girls from her private school when her world was turned upside down. Suddenly a gust of wind sheered off the upper half of the bus and the top halves of everyone in it. She only just survived because she had knelt down to pick up her pen. Things only get weirder from there, with some serious body-swapping and quite a lot of gore in between.