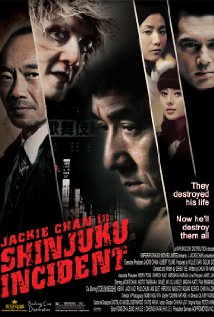 Shinjuku Incident is a 2009 Hong Kong crime drama directed by Derek Yee, produced by and starring Jackie Chan, partly intended to prove that He Really Can Act and isn't just the goofy martial artist he is commonly cast as.

The story follows the path of a Chinese illegal immigrant to Japan named Steelhead after his initial search for his fiancée Xiu-Xiu finds her happily living with Yakuza leader Eguchi. Steelhead coincidentally saves Eguchi's life during an act of revenge. Eguchi then has Steelhead assassinate several of his enemies, and rewards him with both territory and legal citizenship. This unfortunately places him in the middle of a Mob War between the Yakuza and the Triads, with an empire composed mostly of the people who have helped him so far. Further complicating things is Detective Kitano, a Japanese policeman with immigration who initially agrees to stop pursuing Steelhead after the latter saves his life, but is later drawn into the action due to the nature of Steelhead's "business." Eventually, a series of violent aggressions by rival gangs that all accidentally end up hitting Steelhead's soft-spoken brother Jie and the deepening corruption of Steelhead's friends cause him to realize what he has become. He resolves to break up his empire with the help of Detective Kitano, at which point it may already be too late...