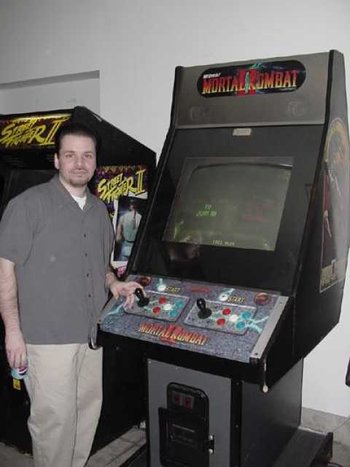 Any questions?
"If you look at any other pop culture phenomenon—like if you look at the Teenage Mutant Ninja Turtles, for instance—it became popular at the time right around when Mortal Kombat became popular, and it had its highs and lows, and here they are once again talking about a major motion picture. That's because of its place in pop culture. It's always there for someone to pick up, polish off, blow the dust off of it, and re-release it. And Mortal Kombat will always be that way. It'll be around 50 years from now."
— John Tobias
Advertisement:

John Tobias (born August 24, 1969) is an American comic book artist, graphic and video game designer and writer. Along with Ed Boon, Tobias is best known as the co-creator of the Mortal Kombat franchise from Midway Games and NetherRealm Studios, published by Warner Bros. Interactive Entertainment. At a young age, John Tobias expressed an interest into Comic Books by becoming an artist, where he took weekend courses at the Art Institute of Chicago during high school. After graduating from the American Academy of Art, Tobias was an artist for the comic book series based after The Real Ghostbusters animated cartoon prior to joining Midway Games later on in the late 1980s due to a change of scenery from comic books to video games thanks to advance graphics.

One of his first works at Midway was the arcade version of Smash TV in 1990. During his time at Midway, Tobias befriended Ed Boon and shared a common interest on creating a game of their own in what would become the worldwide fighting juggernaut known as Mortal Kombat. Since then, John Tobias served as the character designer of the entire character roster from the early games in the series through Mortal Kombat 4 as well created the storylines, themes and settings of the franchise's Mythos. Despite being one of the original creators of the Mortal Kombat series, Tobias has never been mentioned in any sort of commentary or description on how the series began, such as the ones found in Mortal Kombat: Deadly Alliance and Mortal Kombat: Deception. He can be seen in the commentaries for Mortal Kombat II and Mortal Kombat 3 in the Midway Arcade Treasures 2 game.

Between 1999 and 2000, Tobias was planning to leave the company to branch off and try his hand at independent development which became Studio Gigante and with other prominent Midway staff members, he left Midway in 1999 during the production of Mortal Kombat: Special Forces. After producing two poorly-received titles, Studio Gigante was closed down. Today, John Tobias is currently a consultant in the video game industry, and is employed by the social game studio Zynga. While despite his departure from Midway, he always keeps in touch with Ed Boon.

.note His Twitter handle "therealsaibot" is a reference to the character, Noob Saibot. Who of course, is Ed Boon's & John Tobias' surnames spelled backwards.