Western Animation / The Goddess Of Spring 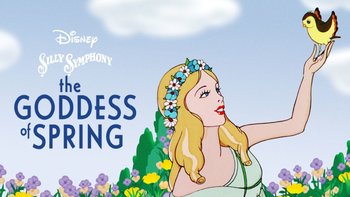 A proto Disney Princess, in more ways than one.

The Goddess of Spring is a 1934 Silly Symphony directed by Wilfred Jackson. While it is ostensibly an adaptation of the Greek myth of Hades and Persephone, it was actually created in order to give the Disney animators practice on drawing realistic humans, in preparation for Snow White and the Seven Dwarfs. Unfortunately, the animators weren’t quite there yet, and the short initially flopped. Today however, it’s one of the more famous Silly Symphonies.

The short opens with the Goddess of Eternal Spring frolicking through the woods, surrounded by her animal and plant subjects. As the narrator says, the whole world loves her because she keeps the Earth in eternal springtime. However, she is soon kidnapped by the god Pluto (who in this case looks a lot more like the Christian devil) so that they can be married. He takes her to his underground layer, full of jewels, fire, and dancing minions. Meanwhile, winter sets in and everyone on Earth is miserable. The Goddess is miserable too, so much so that Pluto allows her to stay above ground for 6 months out of the year, and that's why we have winter.

The Goddess of Spring contains the following tropes: