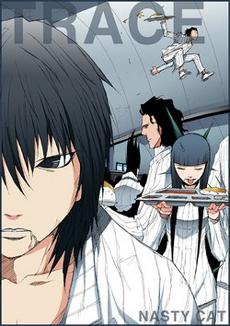 Thirty years ago, a mysterious species of creatures known as Troubles began a gradual invasion to conquer the Earth. However, entering the human world unleashes energy with an unexpected consequence: the creation of humans with mutant superpowers. Whether they gain their new abilities at birth or in the course of life, these rare humans are known by only one name—Traces. A Trouble always leaves behind a Trace.

One such Trace is Sa Ghang Gwon. His birth as a Trace killed his father and terrified his mother to such an extent that she fled for her life. Now, he must live a double life to protect his adopted family. By day, he plays the role of school wimp, but by night he's a Trouble hunter. All goes well until one day, a Trouble appears in his very own classroom and threatens Taeun—his closest friend and family member.

Kim Yun-Seong is another Trace, who acquired his mutant abilities during his early 30s. Soon after the acquisition, his wife and daughter were taken away from him for experimental purposes. All goes well until he loses contact with his family. There is an attempt at his life. Yun-Seong reports this to the police and finds himself a wanted man. He eventually finds where his family is but can't go in because of the Traces guarding the building. After almost getting killed, another Trace finds him and offers a plan to get into the building.

Translations of Trace can be found here.

The offical site for the webcomic can be found here.

The movie version of this is under development.

A sequel, Trace 1.5, is now under way. with already four

Trace has examples of: