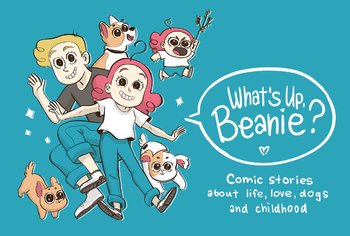 Beanie’s Comics (sometimes referred to as What’s Up Beanie?) is an independent slice-of-life webcomic created by Alina "Beanie" Tysoe.

The series revolves around the daily life of Beanie, a pink haired personification of the author/artist. Most comics in this series revolve around situations that anyone can relate to, such as dealing with social anxiety, obsessing over cute pets, and sharing childhood memories. There are three different types of comics; the main Adult Beanie comics, the Baby Beanie comics, and the Teenage Beanie comics.

The series was started on May 18, 2019, and is still being made to this day. It is available to read on WEBTOON

. The series appears to be quite popular within the world of webcomics, so much so to the point that Alina has put out some merchandise of the comics.