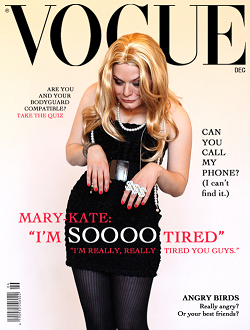 A web series written and performed by Elaine Carroll. It satirizes the life of actress Mary Kate Olsen, with both Olsen twins played by Carroll. Mary Kate's fictional bodyguard appears frequently in the series, and occasionally co-stars with Ashley. The web series is notable for Flanderizing common media portrayals of the Olsen twins to the point of absurdity, and getting downright silly with some of its plotlines.