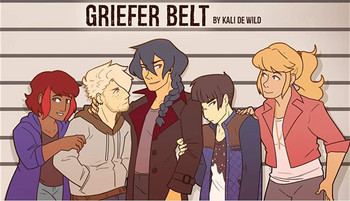 is a Webcomic by Kales de Wild.

Synopsis copied from the about page:

Griefer Belt is a Slice of Life series about queer criminals in the black market.

Scott works for a black market company that deals in harvesting and trading human organs. His boss and partner (in crime), Lars Van Allen, is heir to the organization but lacks certain abilities to properly run a business.

Can also be found