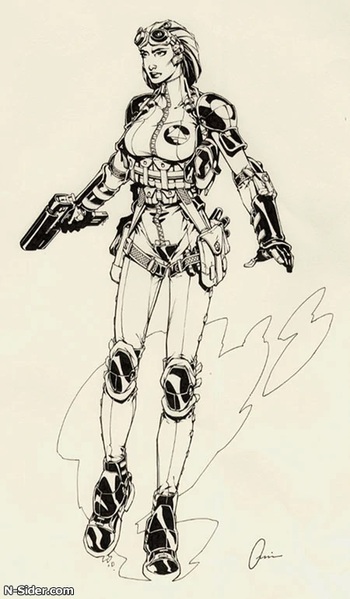 Metaforce (also known simply as "Action-Adventure") was a cancelled Action-Adventure game intended for the Nintendo Gamecube, developed by Retro Studios.

The first version of the game was a Third-Person Shooter set in a futuristic society where gene editing had created a utopia, the game starred a trio of meta-humans known as the "Metaforce" — consisting of a trio of sexy women — who must stop the machinations of villainous forces who wish to repurpose the technology for vile ends. The trio consisted of Brynn, a cybernetic girl who specialized in firearms, Miko, a ninja with psychic abilities, and a third, unnamed woman, who was a rifle-wielding assassin, each with their own playstyle. The game would have been an thirty-hour adventure split into three acts, each with its own antagonist: Act I would focus on the leader of an Indian Evil Luddite terrorist cult; Act II would have focused on a neo-Nazi eugenicist who wished to use the team's genetics as the basis for a beautiful Master Race army; and Act III would focus on the individual who orchestrated the previous two events, a South African psychic with mind-control abilities.

While Nintendo executives weren't very impressed with the other three projects that the fledging Texas studio had in development, note well, they were okay with NFL Retro Football they where deeply interested in the pitch for Metaforce. With their main concerns being that juggling three protagonists was too ambitious, and that third-person cameras in 3D video games was still a challenge in the late 1990s, the team created a new design document for a First-Person Shooter game that would have Brynn as the sole heroine. Upon presenting this version of the game, Shigeru Miyamoto stepped in to give his own input: Brynn was a boring protagonist and should be replaced.

This led to Metaforce's third and final design document, with a new plot featuring an alien with sonic abilities who was captured by the United States government following a spaceship crash, and subsequently became a federal agent tasked with helping fend off an invasion from another alien species. It was the designs for the enemy aliens

in this game that resulted in Miyamoto recalling the existence of a certain dormant Nintendo sci-fi series and asking if the team would be willing to pitch a brand-new entry in that franchise. The team accepted, and Metaforce (as well as every other project at Retro Studios) was cancelled in favor of creating Metroid Prime.