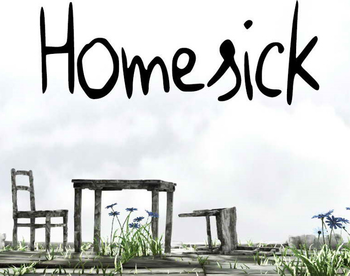 Homesick is an Environmental Narrative Game, developed by Lucky Pause and released on May 28th, 2015 for PC through Steam.
Advertisement:

It opens In Medias Res, with the protagonist waking up in a heavily deteriorated building. They may or may not know the reasons why they are there; however, the player most certainly doesn't, and so is left with nothing to do besides searching for clues to understand what happened. Moreover, while in most games of this type books and other notes could be relied upon to shed the light on the story, here, they are frequent, but are invariably written in a clearly alien language. The first recognisable thing you find is a vague child's drawing of a person and some flowers. Just what exactly happened in this world?

It is not to be confused with Homesick (2012), which is a freeware 2D Survival Horror game.