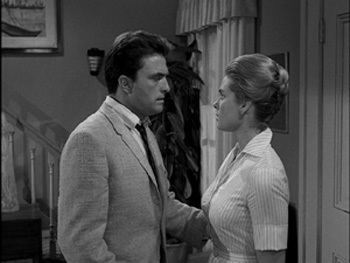 Philip asks for an explanation from Ellen.
Rod Serling: You've seen them. Little towns, tucked away far from the main roads. You've seen them, but have you thought about them? What do the people in these places do? Why do they stay? Philip Redfield never thought about them. If his dog hadn't gone after that cat, he would have driven through Peaceful Valley and put it out of his mind forever. But he can't do that now, because whether he knows it or not his friend's shortcut has led him right into the capital of the Twilight Zone.

The Intrepid Reporter Philip Redfield finds himself in the small, seemingly town of Peaceful Valley, New Mexico. However, something sinister is around. Gradually, he discovers the truth about the place. He also meets a beautiful hotel porter, Ellen Marshall, who might be more sympathetic to him than other people in town.

Valley of the Tropes

Rod Serling: You've seen them. Little towns, tucked away far from the main roads. You've seen them, but have you thought about them? Have you wondered what the people do in such places, why they stay? Philip Redfield thinks about them now and he wonders, but only very late at night, when he's between wakefulness and sleep in the Twilight Zone.