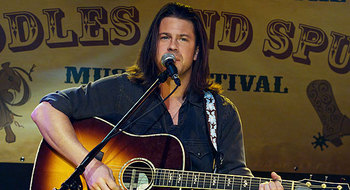 Christian Kane as Eliot Spencer as Kenneth Crane.
" Some roads, you start going down, well, you can't turn back, and I'm about 100 miles down one of those right now."
—Eliot Spencer
In Memphis, aspiring Country Music star Kaye Lynn Gold is singing her new song to her brother and accompanist Shane—until Mitchell Kirkwood, a former country star turned corrupt record label owner, and his men barge into the place. Kirkwood accuses the siblings of talking to lawyers after he warned them not to; as punishment, he crushes Shane's hands.
Advertisement:

At the Leverage HQ, Lynn tells the crew that her brother will be lucky if he gets back any mobility in his hands at all, and will never be able to play the guitar again. She explains that Kirkwood hired them to write songs for other singers and even allowed them to record an album in his studio for free, then cheated them out of the royalties for their work and stole the album they recorded, claiming that it would be a waste to pay unknown talents like them for their songs. In the meeting room, the team learns that Kirkwood started as a country singer but only put out one hit before moving on to starting his record label and producing other country artists. He's made a lot of money this way and has been taken to court many times, but the charges were always dropped. Hardison explains that Kirkwood stole the Golds' album by stealing the digital master, a high-quality, multi-channel, studio-recorded, mixed, and engineered tape that could cost millions of dollars. Nate’s plan is to get back the digital master and the money Kirkwood owes the Golds for their songwriting (plus some extra for Shane's hospital bills), and to make sure Kirkwood can't continue to exploit other aspiring artists, by using the Fiddle Game con.

At Saddlebag Saloon in Memphis, Nate presents himself to Kirkwood as the manager of a new singer, Kenneth Crane (Eliot), and tells him that he's received an offer of $25,000 for the rights to a song Crane has written. Sophie, using the name Virginia Ellington, poses as the would-be buyer and (backed up by a fake web site created for her by Hardison) convinces Kirkwood that she wants the song because the famous British rap star she represents plans to sample it in his latest recording. By paying $25k for the rights now, her record label can prevent Crane from claiming a cut of the profits later.

Meanwhile, Eliot has a stage fright, fretting over the size of the crowd he's expected to sing in front of. Hardison assures him that he has a program in place to correct Eliot's pitch over the bar's speaker system as he sings. Kaye, helping Eliot practice, takes a different approach:

Advertisement:
Kaye Lynn: How do you feel when you play?
Eliot: I'm... I think... I think I got it.
Kaye Lynn: See, that... that's your problem. You're thinking about how to play to the song. And I'm asking you how do you feel when you play? You ever been in love?
Eliot: Once.
Kaye Lynn: How'd it end?
Eliot: I made her a promise that if she ever needed me that I'd be there for her.
Kaye Lynn: What's wrong with that?
Eliot: Because I made the same promise to the United States government. And I found out you can't make that promise to more than one person.
Kaye Lynn: That feeling, right there? Hold onto that, and you'll do just fine.

Showtime starts as Eliot, introduced as Kenneth Crane, sings Kaye Lynn’s new song "Thinking Of You." Hardison begins to panic because his program is not making any corrections to Eliot's pitch, but Nate points out that it's not correcting because it doesn't need to - Eliot's singing is fine on its own. When the song is over, everyone goes wild. Kirkwood has his henchman Jesse take Nate aside so that he can confront Sophie and insert himself into the deal, lying to her that he and Crane's manager are old childhood friends and demanding $100,000 for the rights to the song. Nate finds himself being menaced by a pair of musclebound thugs; he calls for Eliot's help but Eliot, making out with Kaye Lynn, has taken his comm off and does not hear him. When Kirkwood comes into the room, expecting to find Nate roughed up and intimidated, he instead sees Nate sitting calmly and both of his goons unconscious on the floor. He thus has no choice but to give Nate the money.

Back at the HQ, Nate hands the money over to Kaye Lynn, explaining that this is how the Fiddle Game works: they have sold Kirkwood something that he thinks is much more valuable than it is. Now the only thing left is to steal the digital master of the Golds' album from Kirkwood's studio. Hardison and Parker disguise themselves as famous musicians (Hardison as British rap star K-Gent; Parker is not named but heavily implied to be Björk) to infiltrate the recording studio office, under the pretense of sampling Kenneth Crane's song. Eliot, meanwhile, is appalled to discover that he's become an overnight country music sensation with internet fan sites and a pack of female fans following him around.

Hardison: I been meaning to tell you, this, uh, Kenneth Crane? He is blowing up on Twitter. He's got a fan page and everything. It's a pretty good picture, too.
Eliot: [running from fans] That's the problem. I can't have my picture out there like that.
Hardison: Well, contrary to what y'all may believe, I do not control everything that happens on the internet.
Eliot: There's a price on my head in three different countries, and I'm fairly certain a fatwa was issued!

Once he makes it to the studio, he and Hardison squabble over the recording of his song while Parker locates the safe containing the digital masters. She brings all of them to the recording booth, where Hardison discovers the original master for the song that originally made Kirkwood's name in country music and realizes that it is not Kirkwood singing - the song was actually recorded by a different singer, Jesse Jenkins. Jenkins sued Kirkwood, but then died under suspicious circumstances and Kirkwood was implicated but never charged. Nate realizes that Kirkwood intends to do the same thing to Eliot... who has been busy fighting off Kirkwood's henchman in the soundproofed recording booth while Hardison and Parker were distracted by the masters.

They make a hasty exit from studio, but back at their hotel room they realize that Parker has brought every digital master except Kaye Lynn's, which they accidentally left behind in the machine. Eliot realizes that this will point Kirkwood towards Kaye Lynn and rushes to her house, where he finds her in tears: Kirkwood has stolen her spot in the upcoming music festival and is going to use her brother's song, the last thing she and Shane had left that Kirkwood had not managed to take from them. Nate and Hardison both say that there is no way to salvage the situation, that they will need to rework the plan and come at Kirkwood some other way in a few days, but Eliot refuses to hear it: "Help or don't help, but don't tell me it's too late!" Putting Kaye Lynn on his motorcycle, he rushes her to the music festival while the rest of the crew sets to work stalling Kirkwood with stunts like convincing Kenneth Crane's mob of fangirls that Crane is in Kirkwood's truck. Parker even gets on stage (still in her "weird European pop star" getup) and fakes a "performance," which buys Eliot enough time to confront Kirkwood backstage.

Eliot brings up Jesse Jenkins, prompting Kirkwood to punch him in the stomach; leaning over him, Kirkwood tells him he wouldn't be stupid enough to confess to murder in a room full of microphones, or he'd never have gotten away with it. Kirkwood then goes on stage and begins lip-syncing to a pitch-altered version of Eliot's recording. A few lines in, however, the audio of the vocals is cut, allowing Kaye Lynn to take over singing from the balcony to great applause from the crowd. Her performance is followed by a recording of Kirkwood's confession, which Hardison was able to capture from Eliot's earbud. When Kirkwood tries to play it off as a joke, Eliot demonstrates the correct way to punch someone in the gut when you want them to stay down.

Nate hands the master back to Eliot while Kirkwood is taken away by the cops. Lynn is practically mobbed by A&R (artists & repertoire) representatives impressed by her performance and interested in promoting her as a singer. She thanks Eliot and the team for their help as he gives her back the digital master, and even invites him to join her, pointing out that he's a natural-born country star. Eliot demurs, saying that he's too far down his current path to turn back (see page quote).

As they leave, Eliot asks Nate how he managed to take out those two goons by himself, to which Nate simply says that they got into a fight with one another. Sophie wonders where Eliot was while this was going on, which he plays off as "getting notes on [his] performance" from Kaye Lynn. The conversation is derailed when a young woman stops them; Eliot assumes that she wants an autograph, but fame is fleeting and she just wants to know what time it is.

Tropes stolen in this episode: