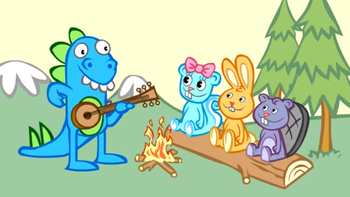 A blue dinosaur is entertaining a trio of small woodland animals (squirrel, rabbit, beaver) by playing his banjo. The banjo suddenly breaks, causing the critters to laugh at him. Offended by this, he begins to slaughter the critters with his banjo. The squirrel gets decapitated and her head lands in the fire pit, the rabbit gets cut in half vertically, and the beaver is also decapitated. However, the beaver's head is still aware and bites down on the dino's leg, causing him to scream in pain.