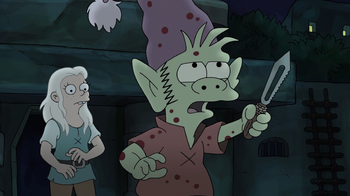 I need those berries, my people are dying.
"Today, I am the bravest Elf since Brave-o. At least until he chickened out and started pronouncing his name 'Bravo' and became the Elf who applauds."
— Elfo

When dirty water makes the Elves in Dreamland sick, Elfo, Bean, and a bounty hunter run to the ogre territory to find berries that might cure them. Luci stays behind in order to scam the rich Elves out of their money.

It's Wash Day in Dreamland, and everyone is washing their one set of clothing, much to Elfo's chagrin, who dislikes being naked. Everyone starts dropping the dirty water into the street, and all of it flows into the Elf quarter. The elves think it is a gift and begin to play and drink with the water - only to get ill soon enough.

A quarantine is immediately established for the elves, one Bean, Elfo and Luci immediately ignore to see what's going on. During a council meeting, one elf states the only cure may be the Legendberry, and Pops mentions he saw a Legendberry tree once when he visited the Ogres. A wandering adventurer, "Handsome" Wade Brody Jr., offers his services in retrieving the berries for ten thousand gold pieces, which shows to Luci how rich the Elves are thanks to their candy business.

When Pops becomes ill, he tells Elfo that his mother is dead, and Elfo decides to join the expedition along with Bean, while Luci chooses to stay behind to "help" the sick elves.

During the river travel to the Ogre homeland, Wade regales Elfo and Bean with stories of his adventures, but that night, with both humans asleep, Elfo sneaks into Wade's cabin and finds a children's book that has the same stories Wade has been telling them: as it turns out, Wade is an used boat salesman who thought it would be an easy adventure. The boat is attacked by living vines that trap Bean, but Elfo manages to liberate her while Wade runs away, and the two go into the rapids.

Meanwhile, Luci tricks the sick Elves to come into his hospital by making them sign their wills to him, and giving them pills that he has them wash down with more dirty water.

The next day, Bean and Elfo manage to reach the Ogre's main city. Bean tries to use fire to scare the Ogres away (unaware that Wade was a fraud and his stories total bunk), and the Ogres easily capture her - and she sees Wade's head stuck on the top of a spear. Elfo sneaks during the night, making good use of his small size, and ends up finding the Legendberry tree, but he is then captured. After a brief scuffle with the ogre he accidentally stabbed in the eye on his first day out of Elfwood, the Ogre King and Queen decide to have him and Bean prepared for lunch for the next day.

When he is brought to the dungeons, though, Elfo manages to escape, and tricks the Ogres into killing each other by jumping around between them, letting Bean escape. The two go to the tree, where they find the Ogre Queen - but, much to their surprise, the Queen allows them to take as many Legendberries as they need before leading them to a secret escape route. As she closes the door, the Queen hears Bean call Elfo, and she seems to be shocked.

Bean and Elfo arrive just as Pops seemingly dies, even after he gets Legendberry juice down his throat. While Bean and Luci heal everyone, Elfo mentions a few unkind things he dislikes about his father before pointing out he was the best father he could ever have - only for Pops to revive and mention he's glad he stole Elfo's college fund.