Recap / Disenchantment - S2 E4: "The Lonely Heart is a Hunter" 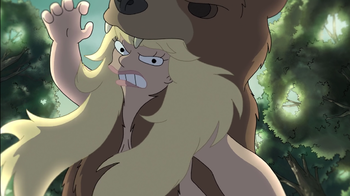 It's a woman and a bear!
"A witch, a lizard and now a bear. Dad, are you building an ark?"
—Bean, about Zog's choices of women.

Heartbroken after his divorce of Oona and Dagmar's betrayal, Zog falls in love with a woman he meets on the Enchanted forest. Bean has dreams of her mother. Luci decides to date Elfo's ex.

Bean begins to have dreams about her mother, who prompts her to look at the music box she has on top of the mantle (and then has to explain what's the mantle and how she got it). Telling her father about it, Zog reveals that, between Dagmer's betrayal and his recent divorce from Oona, he has lost the will to marry again. Odval tries to trick the king into a party to which he has invited all the noble unmarried women in Dreamland, but he decides to go out to hunt.

Elfo takes Bean and Luci out to the new Elf quarter in Dreamland, where all the elves now live. After an encounter with three trickster elves, the group finds Kissy, Elfo's old girlfriend. Hearing that she likes bad boys, Luci chats her up and asks her on a date, much to Elfo's chagrin.

Zog enters the Enchanted Forest, where an attempt to hunt a deer is unsuccessful as he loses his crown. Continuing to go in, he finds a bear fishing in a river, only for the bear to shed its skin and transform into a woman. Zog accidentally hits the fish with a crossbow bolt and the bear-woman finds him: the two begin to fight, but they suddenly fall in love. The bear-woman introduces herself as Ursula, a forest selkie, and Zog invites her to the castle.

That night, during the banquet, Ursula attracts (negative) attention with her non-existant manners, but the King does not seem to care, being besotted with Ursula. Bean talks with Ursula, who teaches her about scratching her back against a column. Doing it later, she ends up finding a covered up Maruvian sigil (like the one that was hidden behind her mother's portrait) and starts to follow the arrows. Elfo finds Luci and Kissy hanging out, and later cuts in their dance to get Luci away and warn him that Kissy is really not interested in him.

The following day, after a night of vigorous sex, Zog notices that Ursula is pining for the forest, and she mentions that, without her bear skin, she can't transform back into one: in order to try to keep her in the palace, Zog decides to hide the skin, and Bean catches him on the act. Bean calls her father out on it, but he replies that Ursula's the first woman he actually feels something big for in years, and he's doing it because it's the only way to make sure she stays.

In town, Luci shows Elfo a set of throwing stars he's bought for Kissy, but then she interrupts them and tells both that she's never been into Luci - she actually only loves herself. Luci dejectedly admits Elfo was right, and Elfo hugs him.

Zog checks on Ursula and realizes she is not happy, being unable to adapt to life as a human in a castle, so he decides to give up and return the bear skin to her. Ursula leaves, and Zog decides that at least she can be happy, so there's that.

Bean's continued perusal of the sigils leads her to a small hidden door that goes into a passageway: while she's inside, her torch blows off and she begins to hear the music from her music box, causing her to run away, and break and throw away her music box.

The following morning, the music box is back together and in her room.