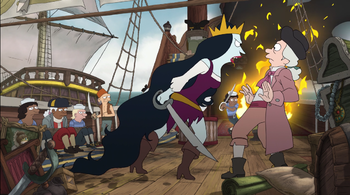 I am crazy lizard queen of No Land!
"[Restore] Our kingdom? Yes. Our marriage? Not so yes. I want a divorce."
—Oona, to Zog.

Oona joins a pirate crew after fleeing underwater. Bean, Luci and Elfo return to Dreamland only to find a maddened Zog. When the two groups find each other, a negotiation starts.

In Mermaid Island, after some time with the mermaids, Bean decides they have to return, so she can undo the troubles she has caused. Getting across from the island to Dreamland is not an easy task, not when the only thing they have is a small rowboat and Elfo is still justifibly angry about how Bean didn't try to resurrect him. Bean apologizes and they make up.

Oona, in the meantime, has decided it is enough loneliness and easily gets rid of everything tying her to the anchor, and she is rescued by a pirate ship, whose captain hasn't left his cabin in years, leaving the men directionless: Oona, who seemingly always wanted to be an Action Girl, leads the pirates into a successful boarding of a merchant ship. When Oona mentions Dreamland, though, the pirate captain - an elf named Leavo - leaves the cabin, and orders the ship to turn to Dreamland.

When Bean arrives to Dreamland, Zog begins to throw stones (and Merkimer) at her, accusing her of being a traitor. Eventually, though, Bean manages to get through and apologize for trusting her mother, and father and daughter embrace - just as the pirate ship arrives, attacking Dreamland. Bean and Zog go to the docks, where Oona shows them the Eternity Pendant, while Leavo demands the kingdom's riches in exchange of the pendant.

Bean and Zog concoct a plot to trap Leavo and use his blood to revive everyone that has been turned to stone, and while the pirates unsuccessfully try to find treasure, Leavo goes to explore the dungeons, as there seems to be something that interests him down there: Zog sends Elfo with Leavo, telling him to knock the pirate out. However, when the time comes, Elfo - who considers Leavo a hero for how he was the first to leave Elfwood - fesses up. Leavo tells the king off for his plan, but gives him a second chance: if he comes with him to Elfwood and apologizes to the Elf King for how he sent his soldiers to attack the place, he will find a way to help everyone.

The Elf King tries to have Zog hanged (interrupting Zog's attempts to apologize), but Leavo reveals to him that he has found something, the thing that prompted him to leave Elfwood. With these news, the Elf King leads all of the elves to live in Dreamland, helping to revive everyone. Leavo tells the pirates he is staying, and Oona (who has divorced Zog and rescued Derek) replaces him, much to the pirates' joy. Oona offers Bean to join her crew, but she turns it down, as Dreamland needs her more.