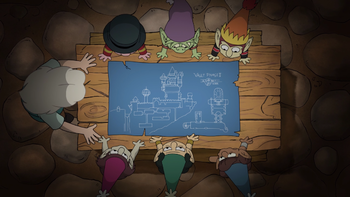 The only way to the vault is...
"Me and my friends fix all kinds of things. Shoes, belts, economic injustice, sandals."
— Grifto

When Bean realizes that Zog is taxing the elves to inhumane levels, she recruits a circus crew to make a heist and return the money to the elves.

Bean gets humiliated by her father after another night of drinking, and as she goes to the local tavern - which Luci wins in a bet - she complains about it, with all the elves within booing Zog as well. Elfo reveals that the King has been taxing the elves so much they are starting to starve. Bean wonders how her father would react if someone stole all that money, and an elf called Grifto offers the services of his circus troupe, proving his mettle by stealing and returning Bean's coinpurse and boots (polished!).

Luci begins to use his bar to make himself rich, while Bean convinces her father to invite the troupe to the castle. During the planning, one of the Elves threatens to kill her if she messes up. While some of them rob the vault, the others keep up the pretense of the spectacle for the King and Prince Derek. Zog finds the troupe so fun that he decides to return all the money taxed from the elves, prompting Bean to run back down to the vault - only to find Elfo trussed up and gagged.

As it turns out, Grifto's troupe is made of trolls that make their life by conning people, such as they have done right now, and they tie Bean up as well while they open up a hole in the wall with gunpowder, hiding the explosion by shooting a cannon at the same time. The troupe manages to get away with all the money in the vault, reaching Luci's bar thanks to a zip line, and the trolls lie to Luci about why Bean and Elfo are not there. Bean manages to reach a bell and sounds the alert, prompting the knights to go down and get Bean and Elfo untied.

The trolls get all the money in their carriage, leaving shortly before Bean and the knights arrive, much to her chagrin. However, Luci's reaction tells Bean that he's done something, and he has: he has changed all the real money with the chocolate coins he's been taking from the elves. Luci had realized that the troupe were not real elves because they asked for whiskey (when no elf would ask for real alcohol at all), they professed a dislike for music (which elves always like) and they shaved their bodies (when elves have no body hair), so he tricked them into taking the wrong sacks and hid the real cash.

The next morning, Bean and Elfo return the elves the tax money in the name of the king, and the elves begin to cheer for Zog.