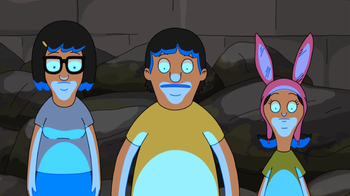 "Magic water, I love you."
"They wanna find out if they saw god or if it was something radioactive."
—Linda

The Belcher kids try saving a plankton blob condemned for bleaching by the yacht club. Back at the restaurant, Trevor is lost without Jimmy and tries changing for the better.