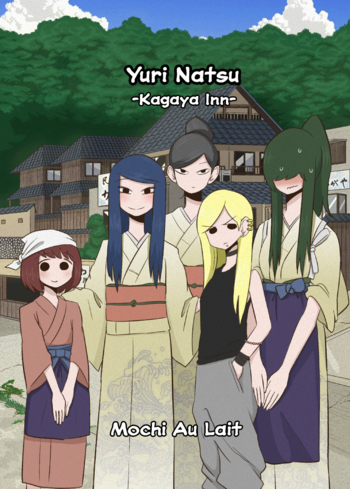 Yuri Summer -Kagaya Inn- (ゆりなつ -民宿かがや-), often called Yuri Natsu as well, is a 2017 yuri manga by Mochi Au Lait. The series chronicles the goings on at a Ryokan (inn) named the Kagaya Inn during the busy summer season. The Kagaya family, for whom the inn is named, are an eccentric bunch consisting of a middle-aged mother, Nene, and her five daughters: Yoh, Miki, Kuki, Tsubomi, and Hana (from oldest to youngest) who range from mid-20s to school age.
Advertisement:

As fate would have it, all five sisters like girls, and more often than not, each other as well. Aside from that, the family actively nurtures guest pairs with yuri potential. The series is based on a serialization of one of the author's one-shot doujin titled Yuri Family that was released mid-June 2017.

Released beginning in September 2017, the chapters are being serialized online as a Webcomic as well as being published in print at some point, however that's a secret of the author and her publishing company. Currently one can find new Japanese chapters posted on the author's twitter

or their publisher's comic reader