The Last of These Is Not Like the Others 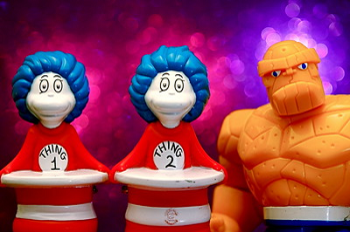 Thing One, Thing Two, and The Thing.
Image

by JD Hancock.
"It’s called the science of listener attention. We did repetition, we did floating opposites, and now you end with the one that’s not like the others."
— Toby Ziegler, The West Wing, "Somebody's Going to Emergency, Somebody's Going to Jail"
Advertisement:

A dialogue trope where a character makes a list of items, groups, or individuals and then deviates from the pattern established with the last one. Usually Played for Laughs.

In literary criticism, this is called a syllepsis, or semantic zeugma.

Typically used for comedy, the last item is normally a focus of insult or Butt-Monkey status. However, it is possible to just delight in the subversion of the theme listing.

A Sub-Trope of Non Sequitur.

For clarification, vitamins are technically not an invention, since they can and do occur naturally.