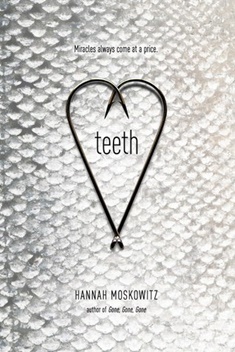 It's just the wind. Not water. Not anyone. Go to sleep.

A novel by Hannah Moskowitz, Teeth is about Rudy, a sixteen year old whose family moves to a small island home to Enki fish. This breed has the magical ability to cure anything from cuts to cancer, and the inhabitants of the island all benefit.

There, Rudy copes with his younger brother's touch-and-go recovery from cystic fibrosis and all the anxiety that comes with. He meets the only two other teenagers on the island — Diana, a book smart girl who rarely leaves her house, and Teeth, a caustic, self-destructive merboy.