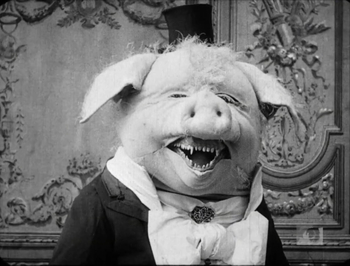 “The Worldy Pig”, or “The Dancing Pig” as it has been called in recent times, is a 1907 silent film produced by the film studio Pathe-Freres. Originally a vaudeville act, it was created in 1906 by a French stage actor nicknamed Mr. Odeo, his real identity unknown, who first performed the sketch at the Casino de Paris. He performed it up until the early 1930s before his eventual retirement. It consists of a pig parading around the stage and bowing to the audience, attempting to imitate a gentleman, before a woman appears on stage and makes her way around the pig and sits at a table. The pig then forcefully begs her for some food to the point where she gets up and takes the clothes off the pig to humiliate him/show him the animal he really is. The pig tearfully apologizes for his actions and the lady forgives him, giving him a cane and the two dancing together. The pig then dresses up as a lady, and the two dance once more before they disappear offstage and the pig returns in the nude. He bows, and sits back at the table where a wine bottle sits and he proceeds to drink from it. The pig then gets wasted, and stumbles offstage as the curtains close. In the silent film, the layout is much the same however the final part of the play with the drunken pig is replaced with a now infamous closeup shot of the pig where we see some of the different actions of his face such as a grin, tongue wag, and wink. The filmed version became known in recent years thanks to its memetic status and creepy nature, thanks mainly to the final shot of the pig. It spawned several Creepypastas, pieces of fanart, and memes centered around the eponymous animal, with it even getting a page on the Villains Wiki

The film can be found in its entirety here