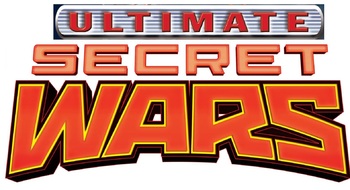 "The incursion ended. A great white light consumed all. The Multiverse was destroyed. The last remaining universes collided. The heroes of Earth-1 and Earth-2 were powerless to stop it. The final incursion destroyed everything in existence. Will silence set in? Will existence begin again?"

"Ultimate Secret Wars" is a Fix Fic based on the events of The Avengers (Jonathan Hickman) and Secret Wars (2015), with a twist: it is not focused on the characters of the main Marvel universe, but on those of the Ultimate Marvel one. The story in the 616 universe still took place as seen, but in the Ultimate one Nick Fury does not trust the Maker, and instructs Sue Storm to secretly watch over him. The Ultimate FF discover the incursions, and the Maker reveals that there is a last one upcoming. Fury, the FF, Miles Morales, the Ultimate X-Men and the All-New Ultimates convene to discuss their options and come up with a solution. Peter Parker was not called because nobody knows that he's still alive (except Miles, who's keeping the secret), but he has to face the crisis anyway.