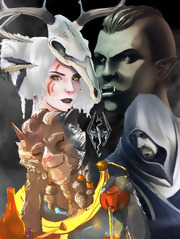 is an Elder Scrolls fanfiction written by Adamant39.
Advertisement:

They travel Skyrim interacting with one another, as well as doing many of the side quests—for example, Xander doing the College of Winterhold questlines, while L'laarzen does the Thieves Guild ones. Notably, none of these characters are the Dragonborn.

Darkand Troubled Past: L’laarzen may seem like an innocent person, one who just wants to live a quiet life as a hairdresser, but in truth it turns out that she was once a member of the Morag Tong, a group of elite assassins based out of Morrowind, not too dissimilar to the Dark Brotherhood, and just as deadly.