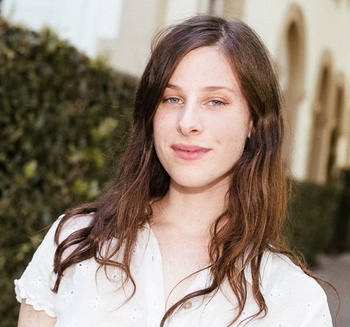 Sasha Rebecca Spielberg (born May 14, 1990 in Los Angeles) is an American actress and singer.

She has taken minor roles in her father's (and mother's... and half-sister's) movies from a young age, but even discounting these has a good progressive acting career. She mostly stars in films, rather than television, and can be considered to have a less successful (thus far) and less independent acting career than her mother and sister. Her role in the 2008 Indiana Jones film, as "Slugger" a young girl who punches a guy in a bar, can be seen as a self Take That! regarding empowered women to the Scream Queen role her mother played and disliked earlier in the franchise.

Musically, she is both a solo singer and part of the Indie Folk group Wardell with elder adoptive brother Theo. Wardell have performed at SXSW and Sasha has also sung with Zooey Deschanel, and often performs at fundraisers. She has also contributed to the soundtrack of Grey's Anatomy. Career-wise, music appears to be her focus with acting as an additional sponsor to this (as in, she's a singer, not an actress, but has ended up doing some acting likely because of the aforementioned parents and sister).