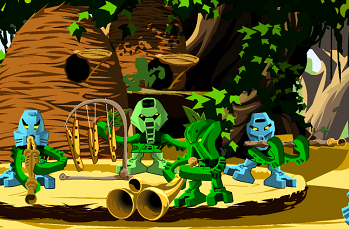 "To unite their voice with this music is the duty of all Le-Matoran."
Advertisement:

From its promotional commercials to its licensed video games, the BIONICLE franchise has had plenty of awesome music to remember it by.

The soundtrack of the Mata Nui Online Game is often praised as the definitive BIONICLE soundtrack, and for a good reason. The game's original soundtrack pieces were composed by Justin Lutcher, along with music from Paul Hardcastle, one cover of Richard Wagner's "Ride of the Valkyries," and some stock music cues.