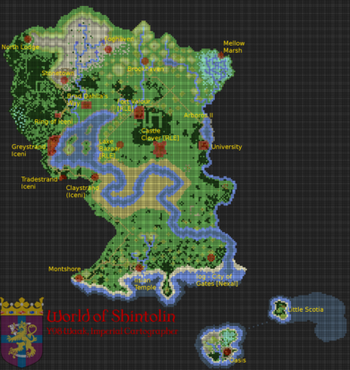 Humanity has wandered the world of Shintolin for millennia, hunting and gathering to survive. But some grow tired of the nomadic life, and are beginning to settle down. Forests make way for farmland, villages grow into towns and cities, and civilisations seek wealth, power, and glory.
Advertisement:

is a free browser-based MMORPG set in a Stone Age-ish world.

The game's original developer essentially abandoned the game recently, and made it open source

. It is mostly abandoned, but those who remain refuse to move on. Two of the players stepped up and continued updating it.