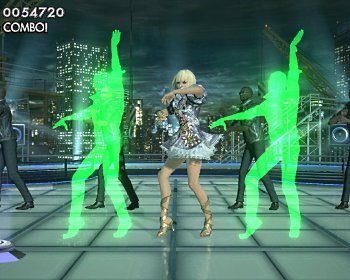 Prepare!
Dance Masters (AKA Dance Evolution outside of America) combines the songs of the DanceDanceRevolution series, with the general movements of Para Para dancers, and announcers that must commentate on everything. Dance Masters is Konami's foray with using the Xbox 360's new Kinect device. The game is deceptively simple: follow the on-screen commands using your whole body. But like DDR, simple does not mean easy.
Advertisement:

While it may have been eclipsed in popularity in North America by its competition (the highly-established Just Dance, and Harmonix's Dance Central), Dance Masters was popular enough on the Xbox 360 in Japan to spawn an updated arcade version in 2012, Dance Evolution Arcade (which is played pretty much like the Xbox 360 version, right down to its use of Kinect, though connected to a PC instead of course)

Unfortunately for Arcade players, eAMUSEMENT service for it was discontinued after August 31, 2016. Fortunately, "offline kits" were made available to arcades carrying Arcade machines earlier that month, so that they can continue to run the game without eAMUSEMENT service.