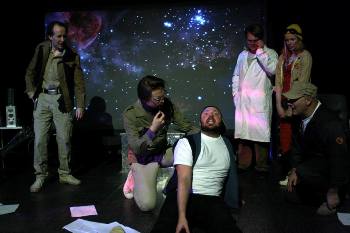 The serial followed the crew of the space ship Goliath, built by humans using alien technology beamed into the minds of children worldwide. The mission of the Goliath was twofold: to travel to a set of space coordinates delivered to humanity along with the technology, and to locate and discover what had happened to the space ship Genesis, sent out years earlier to discover what lay at those very same coordinates.

The plot follows some of the key crew members abroad - the serious, determined ship's captain Jason Drake; the dutiful, highly competent head of security Andrea Lane; the mysterious Doctor Sebelius and his emotionally detached daughter Lauren; the ship's linguistically challenged doctor Jensen and his augmented human nurse; and Carl and Lenny Colson, a pair of Detroit-raised brothers working as mechanics onboard the Goliath. As the story progresses, the personal story of the crew members - Captain Drake's relationship to the father he lost aboard the Gensis, the mystery of Lauren Sebelius' detached personality and missing mother, officer Lane's inexplicable animosity towards Lenny Colson - come out to mix with the overarching story.

What will they find at the deep-space coordinates? Who sent the messages to the children? What happened to the Genesis?