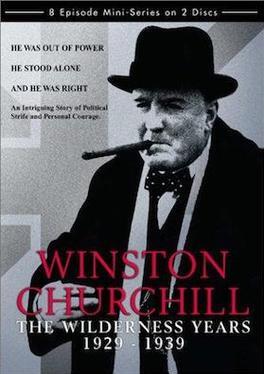 Cometh the man, cometh the hour.
Winston Churchill: The Wilderness Years is a 1983 miniseries about the career of Winston Churchill between 1929 and 1939, based largely on the fifth volume of Churchill's official biography by Martin Gilbert. It stars Robert Hardy as Churchill and Siân Phillips as Clementine Churchill, and as you might expect from an eight-part historical drama covering a ten-year-period, Loads and Loads of Characters.
Advertisement:

Unlike the majority of dramas about Churchill, the focus of the series is on the middle of his political career, rather than his specific contributions in World War II. So, the story begins with not just Churchill out of office, but his party out of government: Labour is in power and Ramsay MacDonald is prime minister. Churchill's party, the Conservatives, is led by Stanley Baldwin (Peter Barkworth).

Churchill is restless without anything to do except be in opposition, and he soon alienates Baldwin by his extremely angry opposition to Indian independence, which Baldwin is cautiously in favour of. Churchill courts the support of the two most powerful newspaper publishers in Britain, Lord Rothermere and Lord Beaverbrook, which further annoys Baldwin. In the 1929 Wall Street Crash, Churchill's investments are wiped out, leaving him short of money, and in a further wobble in his fortunes, during a lecture tour of the United States he gets hit by a car in a New York street and is badly hurt.

The combination of the Great Depression and political differences within the country leads Ramsay MacDonald to form the National Government, a coalition government featuring Labour, Liberal and Conservative politicians in the cabinet, including Baldwin and Neville Chamberlain (Eric Porter). Baldwin appears to promise Churchill a place in the government in return for his support, but Churchill doesn't get one, and Churchill ruefully has to admit that Baldwin never really promised him one anyway, and that the general perception of him is that his political career is over.

Churchill struggles to stay relevant. In a fight over tariffs on British exports to India, which form part of the proposed Government of India Act, Secretary of State for India Samuel Hoare (Edward Woodward) finds out through underhanded means that Manchester cotton barons aim to oppose the bill. He manages to persuade them to drop their opposition, with the promises of a few baubles and a knighthood for one of them. Churchill finds out about this, and accuses Hoare of breaching parliamentary privilege. Hoare is on the ropes, but gets out of it by simply not releasing all his papers to the committee investigating the matter. What makes it worse is that although Churchill is genuinely opposed to Indian independence, he also loathes Hoare, and everyone knows it, making the whole thing look like personal animosity rather than a matter of principle.

In 1935, Baldwin succeeds MacDonald as prime minister. Churchill is more powerless than ever, and what's more, his beloved cousin Charles 'Sunny' Marlborough dies of cancer. He becomes depressed.

Then, while on holiday in the south of France, he's approached by a Foreign Office official, Ralph Wigram (Paul Freeman), who's deeply concerned about the German military build-up. Wigram is the first of various officials who start feeding Churchill information about both German preparedness for war and British unpreparedness.

Churchill starts to raise the issue in the House of Commons, to the displeasure of Baldwin and Neville Chamberlain, Baldwin's Chancellor of the Exchequer. Then arises the matter of King Edward VIII's intention to marry his lover, the American divorcee Wallis Simpson: Baldwin and the rest of the government are dead against this, because Edward as head of the Church of England isn't allowed to marry a divorced woman (the Church not recognising divorce), but Churchill is stubbornly loyal to the King and insists on pleading his case in the House. Churchill's enemy Samuel Hoare lets this happen, knowing that Churchill's popularity will suffer as a result, as indeed it does: Churchill is shouted down by the rest of the government.

Baldwin retires soon after, relieved to be free of the burden of government, and he and Churchill part on respectful terms. Chamberlain replaces him, insisting that he will never give Churchill a cabinet position. Soon after that, the extent of Nazi ambitions in Europe becomes clear as the Germans annex Austria. Chamberlain meets with Hitler and becomes convinced that he can be reasoned with, but few others think so: even Samuel Hoare turns on him. Chamberlain enlists a new sidekick in senior civil servant Sir Horace Wilson, who tries to keep Chamberlain's policy of appeasement on course. But Hitler proves to be a different sort of politician from anything Chamberlain is used to, promising Chamberlain one thing in person and then breaking his promise the next day. Chamberlain admits that Hitler cannot be reasoned with, and pledges the UK to come to the aid of Poland, should it be invaded by Germany. Sure enough, the Germans invade Poland, and Chamberlain announces that Britain is at war with Germany. He meets with Churchill and offers him his old job from World War One: First Lord of the Admiralty. Churchill accepts, and tells Chamberlain that Britain and its allies will defeat Germany.

The Wilderness Years is notable for both its detailed and fairly accurate representation of a part of Churchill's career; its relative honesty about the less attractive sides of his character, such as his devotion to imperialism and his contempt for the cause of Indian independence (although it softpedals his almost manic hatred, at this period, of anything even slightly resembling socialism); and for Robert Hardy's charismatic, BAFTA-nominated portrayal of Churchill. Its impact was such that there wouldn't be another Churchill-centred TV drama until 2002's The Gathering Storm, starring Albert Finney, which is very much a potted version of The Wilderness Years minus the bits where Churchill comes over in a bad light.

Hardy became so associated with playing Churchill that he went on to play him as a supporting character in three more 80s dramas: War and Remembrance, The Woman He Loved, which was about the abdication of Edward VIII, and Bomber Harris, about the leader of RAF Bomber Command, Arthur Harris. (Later in life he played Churchill again, twice.)