Series / The World of Jonathan Singh 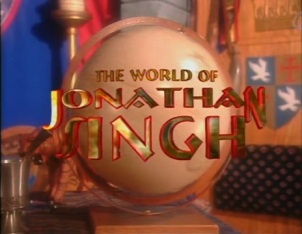 An Edutainment Show about a lively professor who teaches his sister's students about the wonders of his house and learn about science and morals about The Bible (don't worry, it's not as mind boggling as Bibleman).

Each episode starts with Jonathan remembering the day he rescued his sister when they were preteens in India. It then gets interrupted when his sister tells him that her students are visiting his place.

There are various segments that teach kids about science and social studies.

Health Beat:
These news segments feature newscasters telling health and safety (eg. drinking plenty of water, do an hour of exercise, how to deal with cuts)

Once those segments are done, Jonathan Singh tells the children the time he rescued his sister. The flashback continues off from the prologue where young Jonathan rescuing his sister from a ferocious tiger and they hid under a cave, where a treasure is hidden. The two siblings discovered a book of marvelous adventures, and this takes us to...

Winds of Adventure!:
This is the main segment of the series.The series starts a teenager named Jarrod who has to rescue his friend Isabel from a group of nasty pirates. He and Professor Louie rescues her, but their hot air balloon gets zapped by lighting, which takes them into another world. The heroes meet the race of the new world, the tomarlings where they're being lead by Prince Rohanor. Their mission is take back the kingdom from King Halgor.

The series can be watched either on Smile of a Child or on TBN's official website.