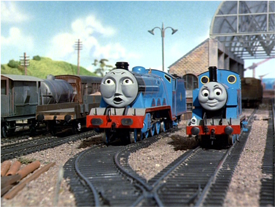 Thomas is a blue tank engine who acts as a station pilot for the bigger engines. His job is to fetch coaches for the other engines and then take them away when the engines need to go to the sheds and rest. Thomas thinks no engine works as hard as he does and is often very cheeky to the bigger engines, especially Gordon, the big blue engine who pulls express trains.

One day, Gordon returns from a long journey and wants a rest, so he finds a siding to sleep in. Then Thomas comes up in his cheeky way, telling Gordon to wake up and work harder. This wakes the big engine up, but instead of falling back asleep, he plots revenge on Thomas to show him what hard work really is.

The next morning, Thomas' crew is unable to make him start. Gordon impatiently waits outside the station for Thomas to bring him his coaches. Finally, Thomas starts. He hurries to get the express coaches and brings them to the station platform behind Gordon. Gordon then enacts his plan and quickly backs down and couples to his train. Thomas usually pushes from behind to help the trains get a good start, but they always uncouple him from the train first. This time, however, Gordon has rushed him so much, Thomas' crew forgot to uncouple him and Gordon quickly starts off, with little Thomas behind. Gordon races through the Sudrian countryside as fast as he could to show Thomas how hard it is to pull the express. It is not long before Thomas is quite out of breath.

After a while, the two blue engines come to a stop at a station. Thomas had never gone that fast before and is very tired and feels very silly. He has a nice long drink from the water tower and puffs wearily home. Thomas learned to never be cheeky to Gordon again.