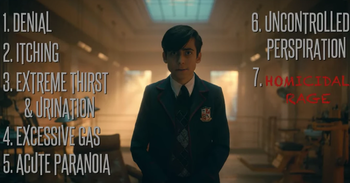 "Vanya is the bomb. She will always be the bomb."
— Diego
Advertisement:

"The Seven Stages" is the eighth episode of The Umbrella Academy's second season.

Following last episode's incident, Five is frustrated at his siblings and resorts to meeting his old self (who is in Dallas to kill the president) and use his past self's briefcase to return to 2019. He brings Luther along to act as a spotter in the inevitable event of paradox psychosis. Five proposes his plan; in private, Old Five proposes just returning to 2019 and playing nice with Vanya.

The Handler is reluctant to accept Diego as a member of the team. Lila promises personal responsibility for him and takes him to orientation, but Diego wanders around to find the Infinite Switchboard. Herb finds him and agrees to operate it to let him see the date of the Kennedy assassination — except in the footage, Kennedy lives, Vanya causes an explosion and reveals her powers, and this is what triggers a nuclear war. A group of agents against the Handler provide him with a briefcase.

Meanwhile, Vanya is in FBI custody. The agent interrogating her is convinced she's a Russian spy; when she tries to use her powers against him she is knocked out cold. She wakes up strapped to a torture machine; her brain visualizes the session as a family dinner with Reginald. As she is electrocuted, so is Harlan.

Klaus comes to visit Raymond and Allison, who are still reeling from the second Swede's death. Diego arrives there with Herb, and the siblings go to rescue Vanya. When they arrive at the federal building, however, they find several FBI agents dead, but Vanya shows no signs of stopping.

Grace begins snooping around Reginald. When Reginald asks her to trust him for now, she refuses.