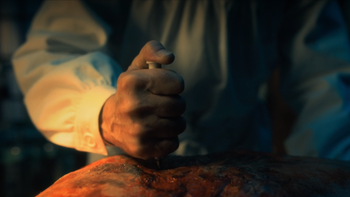 "Damn it! Bring me the serum."
Luther: I stayed because the world needed me.
Diego: You stayed because you couldn't let go of the way things used to be. The Academy. Dad. With Allison. Dad's dead. Mom too, now. We're orphans again, dude.

"Man on the Moon" is the fourth episode of The Umbrella Academy's first season.

Seven years ago, Luther, then the only child left in the mansion, was severely wounded in a mission. Apparently to save his life, Reginald injected him with a serum that gave him his current body. Hazel and Cha-Cha have difficulty getting information out of Klaus. Diego confides in Eudora about the attack. Having heard from Klaus that Five is searching for the eyeballs' owner, Cha-Cha and Hazel blow up the lab.

Allison accosts Leonard in Vanya's apartment, and later gets a drink with her. Luther and Diego clash at first before going on to find Five, eventually stumbling upon him in the library. Klaus makes contact with Hazel and Cha-Cha's previous victims. Eudora busts into the motel room and frees Klaus, but is killed in the attempt. Klaus escapes through the vents with Hazel's briefcase, the contents of which teleport him elsewhere. Diego finds Eudora's body.