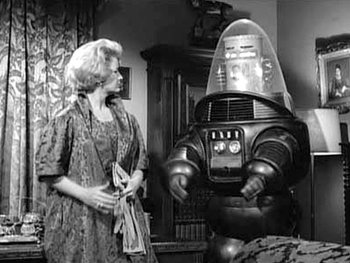 This is the sense of "it."
Rod Serling: Dramatis personae: Mr. Simon Polk, a gentleman who has lived out his life in a gleeful rage; and the young lady who's just beat the hasty retreat is Mr. Polk's niece, Barbara. She has lived her life as if during each ensuing hour she had a dentist appointment. There is yet a third member of the company soon to be seen. He now resides in the laboratory and he is the kind of character to be found only in the Twilight Zone.
Advertisement:

Simon Polk (Cedric Hardwicke) is an inventor. His niece Barbara (Constance Ford) can't stand him, particularly since he constantly nags her for hot chocolate. However, as he notes, she keeps waiting on him in hopes of gaining his wealth after he dies. While she does indeed become heir to his estate, the will has some very strict conditions, one of which is caring for an undisclosed robot Simon created before his death. Thinking nothing of it, Barbara decides to go along with it; however, as she interacts with the robot, she finds it increasingly taking on the traits of her dead uncle, right down to his habits, personality, and eventually his movements and voice. Since Mr. Schwimmer shows up regularly, as per the will's stipulations, Barbara realizes that the only way to inherit Simon's fortune is to continue looking after his property. Especially the robot.

Advertisement:
Rod Serling: Dramatis personae, a metal man who'll go by the name of Simon, whose life as well as his body has been stamped out for him; and the woman who tends to him, the lady Barbara, who's discovered belatedly that all bad things don't come to an end, and that once a bed is made, it's quite necessary that you sleep in it. Tonight's uncomfortable little exercise in avarice and automatons, from the Twilight Zone.
Advertisement: