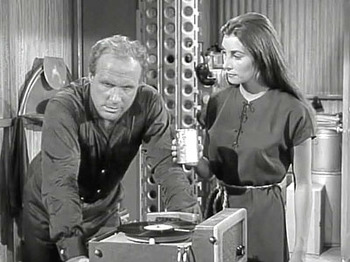 Rod Serling: Witness if you will, a dungeon, made out of mountains, salt flats, and sand that stretch to infinity. The dungeon has an inmate: James A. Corry. And this is his residence: a metal shack. An old touring car that squats in the sun and goes nowhere—for there is nowhere to go. For the record, let it be known that James A. Corry is a convicted criminal placed in solitary confinement. Confinement in this case stretches as far as the eye can see, because this particular dungeon is on an asteroid nine million miles from the Earth. Now witness, if you will, a man's mind and body shriveling in the sun, a man dying of loneliness.

In the year 2046, James Corry (Jack Warden) is a prisoner serving out his sentence for a conviction of homicide. He is to spend fifty years in solitary confinement on an asteroid nine million miles from Earth. He is currently in the sixth month of his fourth year. The only contact he has is with the crew of a spaceship that stops by four times a year to deliver supplies and news updates, but they can never stay for more than a few minutes due to the asteroid's orbit and their limited fuel supply. Beyond that, all Corry has is a metal shack, a car, a journal, and the endless stretches of desert.

Captain Allenby (John Dehner) has been doing whatever he can to make his stay more humane for a long time, often bringing him things to take his mind off the loneliness. As such, on the fifteenth day of the sixth month, he leaves Corry with a large crate and instructs him not to open it until the transport crew is gone. When he does open it, he discovers that Allenby has left him a female robot named Alicia (Jean Marsh).

At first, Corry rejects Alicia, considering her Just a Machine with synthetic skin and wires instead of nerves. However, when he sees that Alicia is capable of feeling and crying, he begins to change his tune. The two spend the next eleven months together playing games and looking at the stars. With time, Corry starts to fall in love with her.

Later, Allenby's ship returns three months ahead of schedule with good news: the sentences have been reviewed and Corry has been pardoned. They're there to take him home. However, they have only twenty minutes to leave and Corry can only bring about fifteen pounds of luggage with him due to the limited space taken up by the other pardoned inmates. That means leaving Alicia behind. Corry can't bear that idea and runs to find her. When he begs her to show them that she's human, Allenby apologizes and shoots her with his service pistol. Her face is blown off, exposing the mess of wires and metal underneath.

He explains to Corry that the whole thing was just like a bad dream, but when he wakes up he'll be back home. Allenby assures Corry that all he's leaving behind is loneliness. Corry tonelessly responds that he must remember to keep that in mind.

Rod Serling: On a microscopic piece of sand that floats through space is a fragment of a man's life. Left to rust is the place he lived in and the machines he used. Without use, they will disintegrate from the wind and the sand and the years that act upon them. All of Mr. Corry's machines, including the one made in his image, kept alive by love, but now obsolete—in The Twilight Zone.