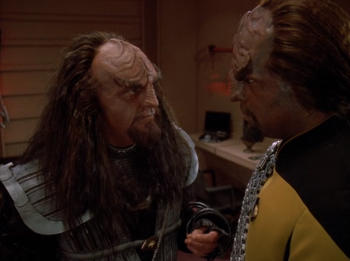 Worf is in his quarters, rehearsing a speech for Alexander about undertaking the Rites of Ascension, as he is almost old enough to be considered an adult in Klingon society. Things don't go quite as planned, however. Alexander, who has always related more to his human side, flatly refuses without a second thought. Picard notices Worf's preoccupation during the daily briefing, and when he learns the reason, he points out that Alexander has had very little exposure to Klingon culture. As the Enterprise is killing time waiting for a rendezvous with another ship, Picard suggests that Worf take Alexander to see the Kot'baval festival at a nearby Klingon outpost on Maranga IV, where he can learn more about the parts of his heritage that do not involve pain sticks.

Alexander has fun at the festival, enjoying the entertainment, street food, and company of other Klingons his age. After a long day, as they are preparing to leave, Worf and Alexander are accosted by three armed thugs. Worf drives them off with the help of another Klingon who introduces himself as K'mtar, a friend of the family sent by Kurn to protect them. Back on the Enterprise, they reveal that one of the daggers left by the attackers bears the seal of the House of Duras, which casts suspicion on Lursa and B'etor, who have been leading their house since Duras' death.

Riker agrees to help search for the Duras sisters. Meanwhile, K'mtar talks to Worf about Alexander's future as a Klingon warrior, as he is the only male heir to the House of Mogh. When Worf explains Alexander's recalcitrance, K'mtar offers to help train him as a warrior. After what happened on the planet, Alexander is more amenable to this idea, so that he can better protect himself and Worf in the future.

The three visit the holodeck to recreate the fight on Maranga IV. Alexander successfully downs one of the attackers with some advice from K'mtar, but hesitates and loses his nerve when asked to finish him off. Then later, as K'mtar is teaching Alexander some Klingon lore, his overbearing insistence on the "proper" interpretation of the stories further deflates Alexander's previous enthusiasm. It becomes apparent to him that K'mtar is even more obsessed than his father about turning him into a warrior.

Meanwhile, the Enterprise has managed to track down the Duras sisters, thanks to a tip from Quark. They immediately plead ignorance in the attempt on Worf's life, and insist the knife must have been used to falsely implicate them. B'etor then notices to her shock that the family markings on the handle include a symbol representing Lursa's son - a son she only just discovered she was pregnant with days ago.

It turns out the sisters were correct - the blade was used to frame them, by none other than K'mtar himself. Worf catches him in his quarters just as he is about to kill Alexander in his sleep. After being subdued by Worf, K'mtar reveals that he is Alexander from the 40 years in the future, and proves it by reciting their last moments together with K'ehleyr when she died.

Future Alexander explains that, as he grew up, he tried to become a mediator in Klingon society, to end the feuding of the Great Houses. The enemies of the House of Mogh took advantage of this and killed Worf, which Alexander was never able to forgive himself for. Thus, he came back 40 years to try and reform his younger self into becoming a warrior, staging the attack as a way to scare him onto the right path. Killing the young Alexander was a last-ditch effort to rewrite history after he failed in his goal. Worf reassures him that he did not fail, and that he has shown him that Alexander will have his own future to look forward to, which is what he really wanted all along. They hug it out, and the adult Alexander goes his own way. Worf continues training Alexander, but with a more relaxed attitude, now that he knows his son will eventually find a calling.