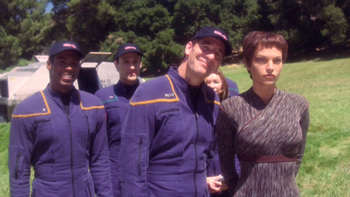 The crew posing for a picture on their first M-class planet. Geez, quit blocking the poor crewman, Archer.
Enterprise is on its way to a nebula, when it notices a planet that's kind of like Earth, but doesn't have any intelligent life. After having T'Pol scan for beacons and find none, Archer decides to explore the planet. He, T'Pol, Malcolm, Trip, Travis, Cutler, Porthos, and a guy named Ethan Novakovich beam down to the planet and explore, with the humans excited but T'Pol just as serious as ever.
Advertisement:

When night falls, Archer and Malcolm return to Enterprise, while the rest stay on the planet to camp and investigate. Travis tells a ghost story, then a storm arrives, so they go into their tents. After a bit of chaos with Novakovich thinking he heard somebody, Cutler teasing him, and Travis and Trip finding a scorpion-like creature in their tent, they decide to hide out in a cave.

Archer learns of the storm and tells Malcolm to keep the shuttle ready in case the away team must leave. Meanwhile, on the planet, Travis goes back to the campsite to retrieve their food, and thinks he sees a group of humanoid aliens. When he tells everybody, Novakovich goes crazy and runs out of the cave, then while they're searching for him, Trip thinks he sees an alien coming out of the rocks.

While T'Pol explores the cave, a nervous Cutler decides to follow her. When she approaches T'Pol, Cutler thinks she sees her talking to an alien, but by the time they meet, there is no alien and T'Pol denies having spoken to one. They go back to the front of the cave, where everyone talks about the aliens they've been seeing and T'Pol again denies talking to an alien. The humans then become suspicious of T'Pol, since she was the one who suggested they camp out. Archer tries to return the away mission, but Novakovich disobeys orders and seems scared, and Archer finds himself unable to land the shuttle (due to the storm) anyway.

Back in the cave, Trip asks T'Pol who the aliens are, but she doesn't reply, feeling that he's being irrational. Travis mentions that they need water, and T'Pol mentions she's found some, but Cutler and Trip think that she's poisoned the water as part of a conspiracy with the aliens. Then, Trip becomes delusional and he starts shooting at the rocks and threatening T'Pol with his phase-pistol.

Archer tries to beam Novakovich back, but leaves get fused into his body. Phlox then determines that his paranoia and insanity was caused by pollen, so Archer contacts Trip (who is now holding T'Pol hostage) and orders him to lower his weapon and (along with everyone else) move further into the cave away from the pollen. Trip doesn't believe Archer, but he complies. Eventually, everyone becomes delirious, with T'Pol forgetting how to speak English (and so speaking Vulcan instead) and Trip hallucinating Archer. Phlox believes Novakovich's condition is too severe to be treated but is still confident that he can save the rest.

Phlox makes an antidote for the pollen and beams it and a sedative down to the planet, but when Archer orders Trip to take it, he doesn't believe him. Archer tries to reason with Trip (who is still holding T'Pol hostage and hallucinating "rock people") but it doesn't work, so he has Hoshi tell T'Pol to knock him out and inject everybody, which she does. The next morning, everybody has recovered and the storm has gone away.