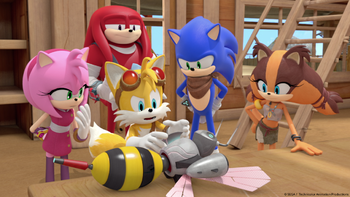 "This is perhaps the strangest game of Operation I've ever played."

At an Ancient digging site in some icy mountains, Mr. Slate announces that he's uncovered the incredibly powerful Fregosi Sapphire. The villagers are impressed, but Eggman suddenly grabs it. He thanks Mr. Slate for the hard work as his Bee Bots move in. Fortunately, Sonic reclaims the Sapphire and races up a mountain as Eggman fires lasers at him. He's knocked off the peak by Eggman, and he quickly asks Tails to save him using the latter's plane. After a fourth-wall-crumbling moment that would make Khonjin House proud, Sonic is saved by Tails, with Eggman still in hot pursuit. Fortunately, Amy reflects one of Eggman's lasers with a mirror, and the boulder that the laser hits breaks into small rocks that hit the Bee Bots, destroying them. Eggman comments about Team Sonic being buzzkills before leaving in defeat.

Sonic tries to return the sapphire, but Mr. Slate refuses to take it back, saying that it'll put his insurance premiums in danger. Knuckles offers to watch over the sapphire (while making a jab at the fans for complaining about him not guarding any rare stones). Amy then asks the team if they wonder what happens to Eggman's minions after a fight; with the others not being as caring as she is, the answer is a blunt "no". She turns to find Orbot and Cubot beginning to take the broken Bee Bots away, but among them, there's a surviving one that Amy trips over, which she takes pity on and quickly tells the others about.

At his workshop, Tails repairs the Bee Bot and informs Amy that he went a step up and installed a personality chip. He tells Amy that in order to nurse the Bee Bot back to health, she must keep her fully charged, make sure her circuits don't overheat, and that she gets enough oil. Amy heads to Meh Burger with her companion after all of that is said and done; mistaking the Bee Bot for a typical Bee Bot, Sonic and company prepare to battle, but Amy prevents them from doing so, revealing that she named her pet "Bea"— as in "Beatrice".

Cue montage: Amy attempts to teach Bea a trick involving catching a hoop, which fails; she takes her for a walk around the village at which point Bea fires upon Lady Walrus' puppy and is subsequently leashed; she tries the hoop trick again to no avail; she asks Bea to play dead in front of Sonic, and Bea explodes; she takes Bea to Tails to get her fixed up, much to her joy; and finally, she tries the hoop trick again, only this time, Bea finally catches it.

Meanwhile, Eggman is exercising... and it only lasts a matter of seconds before he runs out of stamina. Unfortunately, he notices Amy run past with Bea. Amy tries to tell him that Bea is a wild Bee Bot (a poor excuse, for obvious reasons), but Eggman is not fooled and tries to activate a homing device. This fails, so Eggman tries to use a passcode to override Bea, much to the horror of Amy and Bea, but he gets it wrong many times despite trying many passcodes and expresses his frustration over complicated passcodes and having to change them every six months. This eventually leads to him getting locked out from it, angering him further.

Concerned over her new pet's safety, Amy tries to get the Gogoba Chief to hide Bea, and the chief accepts, but at Eggman's lair, Eggman figures out how to get his wrist controller to work again, thanks to customer service. Now that the evil scientist has his security troubles in order, he activates the override code. As Amy watches, Bea suddenly goes haywire and escapes after the chief opens the tent to investigate the noise, and Amy calls him out for letting her escape.

Later, at her house, Amy's crestfallen over the loss of her pet. Knuckles pities Amy and puts a party hat on her (which doesn't help). Sonic and company try to cheer Amy up, but the cupcakes they make for her burn because they're all horrible cooks, and the scrapbook has less success because all it does is remind her of how much she misses Bea. Seeing that desperate times call for desperate measures, Sonic begrudgingly tries to get Amy to talk about their feelings, and it actually begins to work until they hear Eggman is attacking.

When they get outside, Eggman demands that Knuckles give back the Fregosi Sapphire (which he's named "Herman" and is taking care of as if it's his own son) and sics the Bee Bots on Team Sonic. However, Amy prevents her team from fighting the Bee Bots, worried that one of them might be Bea. This wrinkle allows Eggman to nail Knuckles to the outside of Amy's house and take the Sapphire, and he reveals that he plans to supercharge Mega Bot with it so that Eggman will be invincible. Eggman escapes with his Bee Bots, and Sonic's determined to stop Eggman from installing the Sapphire into Mega Bot, mobilizing the team into getting it back; however, Amy sits this one out, certain Eggman will exploit her love for Bea to give himself the upper hand. She allows the others to do what they have to in order to stop him, even if that includes destroying Bea, but she can't be part of it (though Knuckles spoils the moment with a badly-timed bee pun).

At Eggman's lair, Eggman installs the Sapphire into Mega Bot, and it begins firing giant lasers in its supercharged state. Sonic and his team arrive too late to stop Eggman (though Sonic refuses to believe the possibility of himself ever being late unless it's of the fashionable kind), but they decide to fight the supercharged Mega Bot anyway... and, of course, fail miserably as Mega Bot counters them at every turn. Back at Amy's house, while reminiscing about the good times she had with Bea by flipping through her scrapbook, Amy notices a picture with Bea and the hoop, which gives her an idea.

Back at Eggman's lair, Mega Bot continues to effortlessly curb stomp the remainder of Team Sonic when Amy rejoins them, hoop in hand. Eggman teasingly asks Amy if she's looking for her pet and calls his Bee Bots. Sonic wonders how they're going to identify Bea if she looks the same as the other Bee Bots (which Knuckles scolds him for, seeing it as an offensive statement). Amy throws the hoop, and Bea breaks away from the other Bee Bots to catch it. She lifts Amy into the air, and the two are happy to be reunited. This allows Sonic and his team to easily destroy the rest of the Bee Bots, with Sonic making a pun, but Eggman calls Sonic and his team out for thinking it was going to be easy and orders Mega Bot to blast Bea out of the sky, which it does with ease. Amy lands on the ground, and she is livid. She charges at Mega Bot and hits it repeatedly with her hammer, each strike fueled by pure rage; witnessing this, Eggman admits that destroying Bea was a mistake on his part.

Jarred by the repeated heavy hits, the Fregosi Sapphire eventually falls loose, a piece chipping off as it hits the ground. Knuckles embraces his Sapphire, Tails grabs the broken-off piece, and Mega Bot loses its power, opening a window for Tails to tie it up with his Enerbeam and thus allowing Sonic to destroy its head with a spin attack. Unfortunately, this from-behind victory comes as little comfort to Amy, who runs to and sobs over Bea's inactive body.

But there is a happy ending to this story. At his workshop, as the others watch, Tails repairs Bea yet again, installing the Sapphire piece and then spray-painting her with pink paint to differentiate her from Eggman's Bee Bots more clearly. Bea tackles Amy with happiness, and Tails comments that Bea is stronger than before with the Sapphire piece inside her as Knuckles reassures his Sapphire that scars look cool.