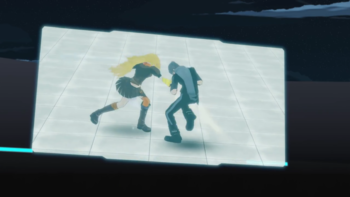 What you see is what you get.
Written by Miles Luna, Monty Oum & Kerry Shawcross
Directed by Kerry Shawcross, Gray G. Haddock & Miles Luna
"If you believe that this will help humanity... then I will become your Fall Maiden. That's what you wanted, isn't it?"
— Pyrrha Nikos

We open to Pyrrha getting her world rocked as Ozpin and co. tell her the secret history of Remnant. Later we start the opening of the singles matches with Yang vs. Mercury.