"Of all the Pokémon to be trapped with...It's like a horror movie, except it's real life!"
—Meowth 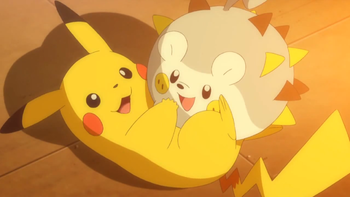 The question is, how long will Pikachu let Togedemaru be this friendly?

After a disastrous attempt at housekeeping, Ash and Pikachu head to the Hau'oli City shopping mall, where they are met and assisted by Sophocles and Togedemaru. Things quickly go downhill when Team Rocket botches a surveillance attempt, causing the mall to lockdown. Can Ash and Sophocles work together to solve the issue and stop the remains of Team Rocket's butchered plan?