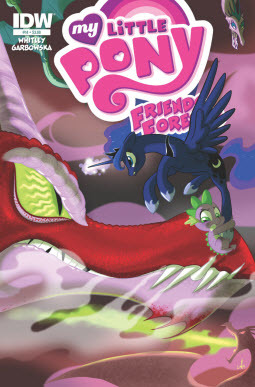 Who's up for a quest with a night pony and a princess's #1 assistant?

Spike is awoken by Princess Luna one night, and is asked to help her with an arson crime spree that is happening in the city of Fillydelphia. En route, Luna explains that the local unicorn police believe dragons from the Dragon Town area of Fillydelphia are to blame, and Luna would like Spike to learn more. When they arrive, the police show the two a recent crime scene, which involves a trail of slime leading the site of the fire. Spike thinks this is odd and unnatural of dragons, and goes off to find out more from them while Luna works with the police to go over suspects.

Spike finds none of the dragons want to talk to them, except for an excitable young dragon, Mina, that runs a comic store. Spike finds from her that there is resentment between the ponies and dragons, and agrees that the immediate blame of the arson on the dragons is more of that showing. Spike goes back to Luna, who has failed to find any leads, and explains Mina's theory that it might have been a unicorn that started it. Neither Luna nor the police accept this possibility, and Luna, frustrated, leaves Spike to continue to find an answer while she takes care of raising the moon.

Fearing another arson, the unicorn police order a curfew on the dragon population much to their dislike. Spike spots a nearby trail of slime, and following it finds a fire snail creature that wandered up from the sewer, its trail in flames. Spike is able to capture the critter, but not before it sets fire to another building which quickly spreads. Spike is able to convince the police to let the dragons help, their ability to withstand fire able to help evacuate the buildings before anypony is harmed. Luna arrives in time to help wake the rest of the ponies and everyone is safe. Recognizing the fire snail was the problem, the police agree to make sure there's no more of the creatures wandering around, while Luna apologizes for distrusting the dragon population. Spike suggests a way to make it up, and takes Luna to meet Mina, who is a huge fan of reformed villains. After a brief visit, Luna takes Spike home with Spike promising to visit the dragons of Fillydelphia more in the future.