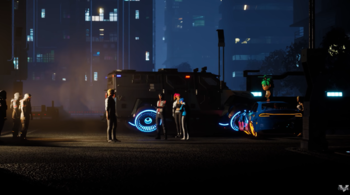 "Well, congratulations, you three. You finally did it. You win. Now what?"
Advertisement:

The Season 2 finale of Meta Runner.

Tari and MD-5 are in the endgame with their mission to bring down TASCorp. Will they finally triumph... and if they do, will it even be the end of it?