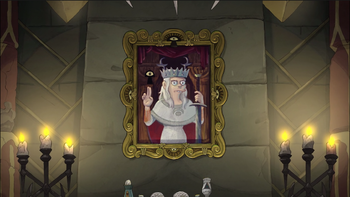 This can't be about ME!
Dagmar: It's impolite to keep people waiting.
Bean: It's also impolite to totally scam your daughter, but that didn't seem stop you.

Bean and her mother get to her kingdom, Maru, and Bean starts noticing something weird about that side of the family.

Oona, having survived Dreamland, gets on Dagmar's ship and warn Bean about her, but is captured and thrown in the sea after a struggle with Dagmar in which she stole her pendant. Dagmar reveals that she has Luci bottled up.

Getting to Maru, Dagmar introduces Bean to her siblings, the Enchantress (Rebecca) and Cloyd. Bean learns that the Kingdom has been facing hard times in the last 20 years due to mismanagement. Bean is scared of the strange behavior of her new aunt and uncle, which her mother dismisses. Meanwhile, Dagmar puts Luci in a bigger bottle and sends him away to a secret room.

Off one night, she tries to go drinking, but ends up meeting a strange old lady that talks about a prophecy and scratches her, telling she was chosen to make their country great again. Bean runs away and during dinner with her family, they schedule a ceremony to receive her officially into their midst. Bean leaves the dinner to investigate a room she was forbidden to enter, only to find a very strange portrait of her over an altar with cut-off arms as what seems to be a sacrifice in a room called "Prophecy Fulfillment Room". She immediately passes out and wakes up in the library surrounded by her family, and tries to get her mother into that room again, only to see it was entirely changed with a portrait of her grandmother instead.

During the night, Bean, now having befriended Jerry, finds that the portrait was taken from another room, and in the Prophecy room, finds a secret door to yet another strange room, now filled with bizarre trinkets, the missing portrait and the stonification potion. She takes evidence to warn her mother, but she dismisses, leading Bean to realize she was behind everything.

Alone and forced to undergo a ceremony that might sacrifice her, Jerry switches places with Bean, allowing her to go search for Luci. She finds him, but during the ceremony, the jig is up and Dagmar kills Jerry, and with Becca and Cloyd, they find Bean in the secret room. While Bean and Luci find each other, the three siblings look for her there, when she is found, she destroys the entire room by throwing the cases one against the other and pooling a strange liquid in the room.

Holding a candle, Dagmar tempts Bean with the idea of throwing the candle into the flammable liquid and letting her own mother blow up, confessing she herself killed her parents when she was younger. Bean refuses, saying she is better than her mother, but when Luci opens the door pushing Bean, she drops the candle accidentally and her mother blows up anyway.

Bean and Luci run to save Jerry only to find him dead, though the Oracle Fire reveals that Elfo is in heaven. Luci reveals that if Elfo gets to Hell, he can find a way to bring him back to life. Luci opens a staircase to hell for them to go down and kicks Luci into Hell. Dagmar returns and fights Bean, but Jerry wakes up and hits her with the hammer before dying. Luci jumps into the closing door to Hell and yells for Luci.