Nightmare Fuel / The Garden of Sinners 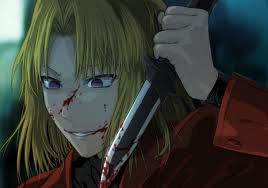 Trust us, this is a lighter moment.
Oh, Nasu, sometimes he can outdo FREAKING Hideaki Anno in terms of sheer messed-up-ness. Overall dark coloring and constant use of silence doesn't help things either. Ghosts that make people commit suicide, human puppets, bizarre carnivorous murderer, and a girl (our protagonist no less) who has a very twisted sense of morality and constantly repressed desire of murder; clearly what you see in a kid friendly series!

Shiki: I want to kill you.

Who is the person in the above picture? He is Lio Shirazumi, the true culprit of Part A, the villain of Part B and quite a brutal one.