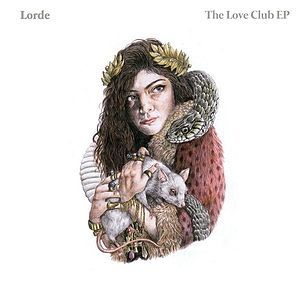 The Love Club is the debut EP by Lorde, released on March 8, 2013. Upon its release, it made it to #2 on the New Zealand Albums Chart after a week and was certified platinum for shipments of 15,000 copies. Outside of her native New Zealand however, few had known about it. After all, it's not like anyone in North America would know about an EP from a 16-year-old girl from New Zealand. That all changed when an agent discovered her singing "Royals" at a school talent show, propelling to #1 status on charts worldwide and her debut album, Pure Heroine, to double platinum status. As such, most of the EP's worldwide sales came after she became a star.

All the songs off the EP would later be added to Pure Heroine as the extended version. Please visit that page for tropes pertaining to songs from that album.