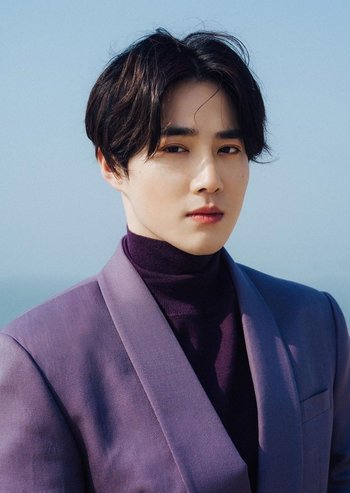 Kim Junmyeon (Korean: 김준면, born May 22, 1991), more popularly known as Suho (also stylized as SUHO), is a singer, actor, and leader of Korean-Chinese boy band EXO and its Korean sub-group EXO-K. He joined SM Entertainment through its casting system in 2006, making a cameo in Super Junior's movie Attack on the Pin Up Boys the year after, before officially debuting in 2012.

Suho is notable for being an all-around actor: besides his drama and movie projects, notably One Way Trip, The Universe's Star, Rich Man, and Middle School Girl A, he has participated in musicals such as The Last Kiss and The Man Who Laughs. In particular, he has received several awards for his role of Gwynplaine in The Man Who Laughs.

His first solo album Self-Portrait was released on March 30, 2020. The EXO leader is the 4th member of the group to release a solo. On May 3rd, 2020, it was announced that Suho would be enlisting to complete his mandatory military service, where he would work as a public service worker, and on May 15th, his fellow EXO members gave him a quiet send-off. He was discharged on February 2022. Afterward, he released his second mini album Grey Suit on April 2022. He also had a collaboration with Thai actor-singer Mew Suppasit for a single entitled Turn Off the Alarm.

Advertisement:
Discography
Mini AlbumsSingles
Filmography
TV DramasMoviesWeb Dramas
Tropes relating to his works with EXO can be found on that page.
Advertisement: