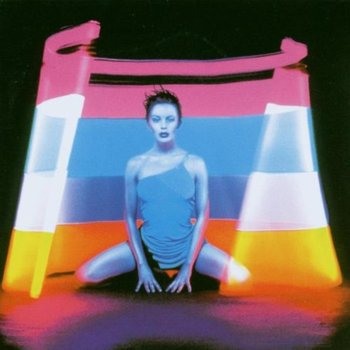 The album's quite stylish cover.
Advertisement:

Impossible Princess is the sixth album by Kylie Minogue, released in 1997 by Deconstruction Records. Showcasing a Darker and Edgier sound than its predecessors (though her 1994 effort was also a darker album than its predecessors, it still had some remnants of her early sound), Minogue took quite the creative control of its recording process, which was new for her. She took inspiration from musicians from around the world, incorporating many different sounds into the album. Generally, the album is heavily influenced by Electronic Music, and features elements of Trip Hop, Drum and Bass, Indie Pop, Glitch, and much more.

Upon release, it was met with a mixed critical response, and although it hit the top 10 in charts in countries, it sold dramatically less than her other albums. As a result, Minogue was dropped from the Deconstruction label, and the heavy criticism she grained from the media made Minogue heavily consider quitting the music business to focus on her acting, seeing the backlash from her artistic ambition as a failure. Fortunately, she made a triumphant return to form with her next album, Light Years in 2000, but she has stated the performance of this album was one of the most disappointing moments of her career and that she wouldn't ever revisit this album's sound.

A few months later, Madonna released Ray of Light, a similar album that saw the artist explore Electronic Music. Ironically, Minogue was the one accused of copying Madonna despite the fact that Impossible Princess came first.

Today, Impossible Princess has been slowly being re-evaluated as a classic that was ahead of its time, seeing as Pop got much more electronic in the 2000s. As time goes on, its being seen on more "greatest of all time" lists and as Minogue's best album (with only Fever being seen as a contender), and is often considered one of the most underrated pop albums of all time.