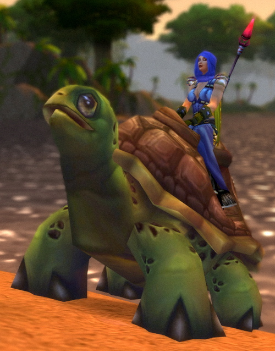 Just like Monkeys and Penguins, many people have an odd fascination with turtles. They come off as clumsy, shy and slow, and helpless if turned on their shell, but they also appear wise and spiritualistic at times. They are also among the longest-living animals on the planet. If you want a very elderly funny animal, it's usually going to be a tortoise.note For those that don't know, turtles are at least semi-aquatic and more likely to hunt live prey like fish or insects, while tortoises are land-based and generally herbivores. Chelonians or Testudines can be used to describe all members of the order. If they get large enough, they can also qualify as a fantastic transport or living island (or in the case of one series and certain mythologies, the entire world).

for ocean and beach conservation. Giant Tortoises are also quite popular for island conservation, especially the Galapagos Tortoise, which the islands were named after.

They're also notable as the main exception to the Reptiles Are Abhorrent trope, being seen as cute and non-threatening. A localized exception is the snapping turtle, which isn't generally considered cute (that being said, their prehistoric looks make them pretty badass), and pretty bad-tempered to boot; softshelled turtles usually tend to be depicted as evil as well, being frankly ugly by most standards. Compare Lovable Lizard, for another goofy-looking and harmless reptile.

The Earth Vellumental, a legendary elemental turtle being, emerges from the dirt.

The Earth Vellumental, a legendary elemental turtle being, emerges from the dirt.