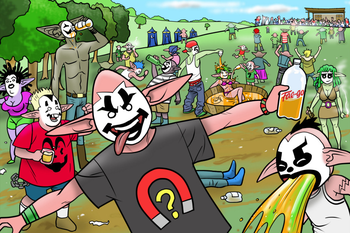 "[Juggalos come] from all walks of life — from poverty, from rich, from all religions, all colors. [...] It doesn't matter if you're born with a silver spoon in your mouth, or a crack rock in your mouth."
— Shaggy 2 Dope
Advertisement:

Within the community surrounding the Insane Clown Posse and Psychopathic Records artists, fans are known as "Juggalos", "Juggalettes" and "Ninjas". Juggalos compare themselves to a family: common characteristics include drinking the inexpensive soft drink Faygo and wearing Monster Clown face paint. They view the lyrics of Psychopathic Records artists (which are often violent in nature) as a catharsis for aggression.

The term originated during a live performance by Insane Clown Posse. During the song "The Juggla", Joseph Bruce addressed the audience as Juggalos, and the positive response resulted in Bruce and Joseph Utsler using the word thereafter to refer to themselves and their friends, family, and fans, including other Psychopathic Records artists.

Thanks to Public Medium Ignorance, Juggalos are often shown in a mocking light in media, despite the fact that the lyrics of Insane Clown Posse and Psychopathic Records artists have encouraged free thought and individualism, and thus there are a wide variety of Juggalos with different interests, beliefs, backgrounds, etc. See the Playing With page for examples of how Juggalos are portrayed in different mediums, from straightforward examples to Straw Fan exaggerations and subversions. The worst example of Public Medium Ignorance toward Juggalos is that some local law enforcement groups and the FBI have listed "Juggalos" on their gang registries. Never mind the fact that there is no evidence connecting any violent act or gang affiliation committed by any individual to any music or music fanbase, or that there is no evidence of the existence of any Juggalo "gangs" despite law enforcement claims, or that classifying "Juggalos" as a gang puts these fans in danger from actual gangs, but blaming Dungeons & Dragons for being Satanic is soooo 1980 and we need to spontaneously blame something for corrupting our youth, right?